The intrinsic connectivity of the salience network (SN) plays an important role in social behavior, however the directional influence that individual nodes have on each other has not yet been fully determined. In this study, we used spectral dynamic causal modeling to characterize the effective connectivity patterns in the SN for 44 healthy older adults and for 44 patients with behavioral variant frontotemporal dementia (bvFTD) who have focal SN dysfunction. We examined the relationship of SN effective connections with individuals' socioemotional sensitivity, using the revised self-monitoring scale, an informant-facing questionnaire that assesses sensitivity to expressive behavior. Overall, average SN effective connectivity for bvFTD patients differs from healthy older adults in cortical, hypothalamic, and thalamic nodes. For the majority of healthy individuals, strong periaqueductal gray (PAG) output to right cortical (p < .01) and thalamic nodes (p < .05), but not PAG output to other central pattern generators contributed to sensitivity to socioemotional cues. This effect did not exist for the majority of bvFTD patients; PAG output toward other SN nodes was weak, and this lack of output negatively influenced socioemotional sensitivity. Instead, input to the left vAI from other SN nodes supported patients' sensitivity to others' socioemotional behavior (p < .05), though less effectively. The key role of PAG output to cortical and thalamic nodes for socioemotional sensitivity suggests that its core functions, that is, generating autonomic changes in the body, and moreover representing the internal state of the body, is necessary for optimal social responsiveness, and its breakdown is central to bvFTD patients' social behavior deficits. 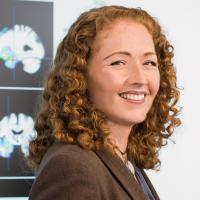 View this news item, Emergence of visual artistic creativity in frontotemporal dementia
About the application process