Despite the negative impact of these these symptoms, sleep disorders in Alzheimer's disease are often misdiagnosed. The resulting medical treatments are also often vague and frequently present with side effects, like drowsiness and falls.

Given this gap of knowledge and the opportunity to improve quality of life, we advocate for the study of sleep-wake patterns across the spectrum of Alzheimer’s disease. To this end, we recently published a Perspective paper in the journal Alzheimer's & Dementia which we will summarize here.

In addition to sleep disturbances, Alzheimer's disease frequently presents with memory complaints for people in their mid-60s (named typical-amnestic Alzheimer’s). However, in some cases the disease may have atypical presentation. In an atypical presentation, the age of disease onset starts under 65 or the patients present with different types of cognitive decline. For instance, instead of memory problems, they may experience significant impairments in language, visual perception, behavior and executive function, like planning and self-control.

The differences between typical-amnestic and atypical Alzheimer’s disease not only relate to the symptoms but also to how brain changes happen during the course of the disease. For instance, the spread patterns of a protein named tau within the outer layer of the brain (cortex), which is a hallmark of the disease, are different for each type. Given these differences in biological presentations, we believe the differences in Alzheimer's disease variants extend to sleep alterations, being that each variant could present with different sleep features.

Uncovering these differences is important because they suggest different patterns of tau spread and loss of brain cells (neurodegeneration) within the interconnected brain areas controlling sleep and wakefulness. Interestingly, these regions composing the sleep-wake system are mainly located in the brainstem, a region under the cortex. 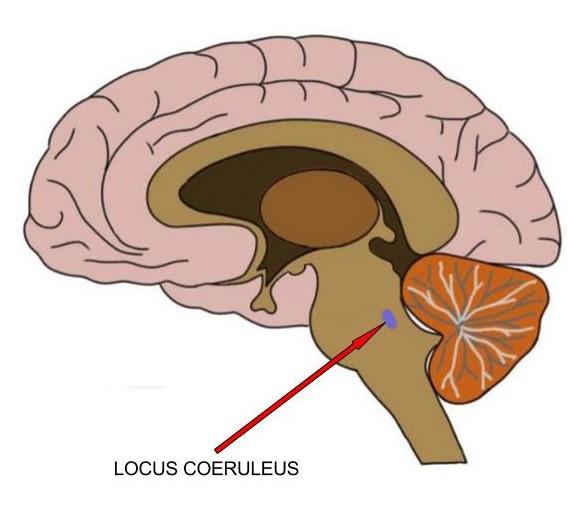 Above: The locus coeruleus is the main source of noradrenaline, a neurotransmitter that regulates several brain functions, especially wakefulness.

Recent investigations led by the Grinberg Lab at the UCSF Memory and Aging Center have demonstrated early deposits of tau on a brainstem nucleus, named the locus coeruleus. The locus coeruleus is the main source of noradrenaline, a neurotransmitter (a special chemical that your nerve cells, or neurons, use to talk to each other) that regulates several brain functions, especially wakefulness. The decline of the locus coeruleus in Alzheimer's disease leads to the loss of function of the system that produces noradrenaline, which can contribute to the disruption of the sleep-wake cycles.

We believe that different variants of Alzheimer’s disease (typical and atypical) may present different degrees of neurodegeneration of the locus coeruleus and other areas involved in sleep-wake regulation. A deeper understanding of the sleep-wake patterns using objective tools would allow us to define the specific patterns of sleep architecture across the clinical spectrum of Alzheimer’s disease and their associated brain changes. We believe this is a unique opportunity to develop novel and tailored treatment avenues for sleep disorders in Alzheimer's disease, with strong potential benefits for patients' care and families' quality of life.